Amygdalin, also known as vitamin B17, is widely found in the seeds of a variety of Rosaceae plants such as peach, apricot, plum, apple, hawthorn, and alfalfa, especially in bitter almonds, about 2% to 3%. . Amygdalin is an effective ingredient in the traditional Chinese medicine bitter almond. It has become a commonly used anti-cough agent and auxiliary anti-cancer drug in medicine.

Laetrile is often wrongly called amygdalin or vitamin B17. It is actually a patented drug that was invented by Dr. Ernst T. Krebs, Jr. in 1952.

During the 1970s, Dr. Krebs falsely claimed that all cancers are caused by a vitamin deficiency. He also claimed that laetrile was the missing vitamin in cancer, which he then called vitamin B17.

He likely labeled laetrile as vitamin B17 so that it would be classified as a nutritional supplement, rather than a medicine. This is likely because the tough federal laws that apply to marketing drugs do not apply to supplements.

Laetrile was likely called vitamin B17 so that it could be marketed as a nutritional supplement, rather than a medicine. This allowed it to avoid tough laws that apply to marketing drugs.

Amygdalin can be hydrolyzed by the intestinal microbial enzyme or the bitter almond enzyme contained in the bitter almond itself to produce a trace amount of hydrocyanic acid and benzaldehyde, which has an inhibitory effect on the respiratory center and achieves antitussive and antiasthmatic effects.

While amygdalin is decomposed by enzymes to form hydrocyanic acid, it also produces benzaldehyde, which inhibits the activity of pepsin and thus affects digestive function.

The mouse hot plate method and acetic acid writhing method confirmed that amygdalin has an analgesic effect, but is different from morphine analgesic. The benzaldehyde benzoin condensing enzyme produced by the decomposition of amygdalin produces benzoin. Benzoin has an analgesic effect. Therefore, the use of amygdalin in the treatment of advanced liver cancer in China can relieve the suffering of patients, and some do not even need to take painkillers.

Amygdalin can effectively inhibit adjuvant inflammation, enhance the phagocytic function of macrophages, and have the function of regulating immunity.

Side Effects of Laetrile

Laetrile is known to have various side effects.Laetrile can cause a variety of side effects, which are worsened by taking it as a pill or with too much vitamin C. Raw almonds, crushed fruit pits and certain fruits and vegetables can also worsen symptoms.

Most of these side effects are caused by too much hydrogen cyanide in the body. That’s why the symptoms of laetrile poisoning are the same as cyanide poisoning.

Research shows that vitamin C can interact with laetrile and increase its toxic effects. 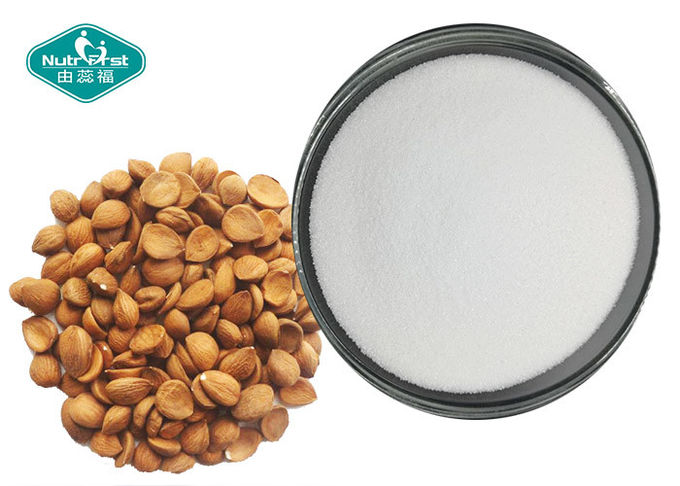